The music of Duke 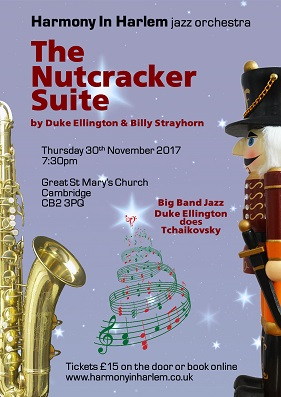 The Nutcracker was arranged in 1960 by Duke Ellington and Billy Strayhorn. Like many of the suites written for the orchestra, Duke delegated a lot of the responsibility to Billy Strayhorn - more than half of the movements are arranged by the latter.

Michael Kilpatrick's transciption of The Nutcracker Suite was performed in May 2017 by the Guildhall School of Music and Drama Jazz Orchestra under Martin Hathaway. Michael's transcriptions are recreated from the original manuscripts residing in Washington DC, and with reference to the recordings.

Harmony In Harlem bring the suite to Cambridge and Harlow for seasonal performances. The band have worked hard rehearsing this music and look forward to performing in Great St Mary's, the University Church in the heart of Cambridge, where Duke Ellington and his orchestra performed in 1967 during the European tour of the first Sacred Concert.

The concert of 1967 was described by the Cambridge News as possibly Cambridge's greatest ever music gig. To pay tribute to the church and that famous event, Harmony In Harlem will also perform the first movement "Praise God" of Duke Ellington's Second Sacred Concert. Alongside the Nutcracker Suite the concert will also feature a selection of Harmony In Harlem's regular Ellington repertoire.